Along with celebrating Black History Month, we make note of National Freedom Day, occurring on the first of February. In 1865 on February 1st, President Lincoln signed the 13th amendment, thereby outlawing slavery. While it didn’t become a national holiday until President Truman signed it into official existence, a former slave, Major Richard Robert Wright, Sr., is the creator of the holiday.

Freedom can be found, and taken away, in many forms, the easiest to see being the physical. So, in line with the idea of freedom, the Press explores the concept through the political, the academic, and the philosophical in Ziad Elmarsafy’s Freedom, Slavery, & Absolutism, John Higgin’s Academic Freedom in a Democratic South Africa, and Olga Sedakova’s Freedom to Believe, respectively. 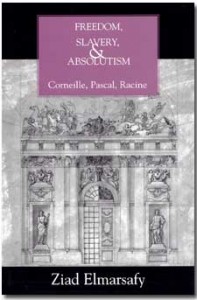 Ziad Elmarsafy explores the concept of freedom by reading the works of Corneille, Pascal, and Racine as political theories in the guise of literature. Within this framework, a certain model quickly becomes apparent, namely that of absolute sovereignty as the guarantor of freedom. The three writers under consideration share the view that freedom is ensured only by absolute authority rather than the absence of such authority. From Corneille, who modulates freedom through an erotic link to the monarch as a means through which the glorious individual is brought into the state’s fold, to Pascal, who traces the liberation of the will via absolute submission to God, to Racine, for whom absolute submission to the most Christian king is the only route to political and personal salvation, Elmarsafy studies a politics of taking charge that differs markedly from the contemporary orthodoxy that privileges individual freedom. Historically engaged, incisively argued, and persuasively written, Freedom, Slavery, and Absolutism will appeal to literary scholars, to political theorists and to readers interested in the history of ideas. 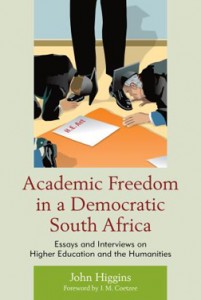 How do we understand academic freedom today? Does it still have relevance in a global reconfiguring of higher education in the interests of the economy, rather than the public good? And locally, is academic freedom no more than an inconvenient ideal, paid lip service to South Africa’s Constitution as an individual right, but neglected in institutional practice?

This book argues that the core content of academic freedom – the principle of supporting and extending open intellectual enquiry – is essential to realizing the full public value of higher education. John Higgins emphasizes the central role that the humanities, and the particular forms of argument and analysis they embody, bring to this task.
Each chapter embodies the particular force of a critical literacy in action, one which brings into play the combined force of historical inquiry, theoretical analysis, and precise attention to the textual dynamics of all statement so as to challenge and confront the received ideas of the day. These provocative analyses are complemented by probing interviews with three key figures from the Critical Humanities: Terry Eagleton, who discusses the deforming effects of managerialism in British universities; Edward W. Said, who argues for increased recognition of the democratizing force of the humanities; and Jakes Gerwel, who presents some of the most recent challenges for the realization of a humanist politics in South Africa. 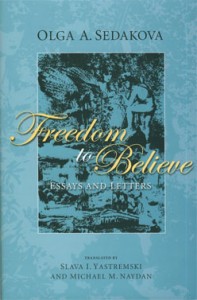 TRANSLATED BY: SLAVA I. YASTREMSKI AND MICHAEL M. NAYDAN

Freedom to Believe is a powerful collection of philosophical and religious essays by a modern poet of distinction. It introduces a highly original and controversial thinker to the Western reader. Olga Sedakova’s central philosophical thought lies in the notion of existential freedom in its association with the liberating power of the arts, especially poetry. These convictions place her firmly in the Russian and European classical cultural traditions, which, in turn, have deep roots in Christianity. Devoutly Orthodox yet fiercely independent in her thinking, Sedakova’s ecumenical humanism places her in opposition to both the “new left” and modern fundamentalism. Indeed, Sedakova’s “conservatism” is more genuinely new than the so-called radicalism of the postmodernists, as she castigates “old totalitarianism” and new commercialism alike, in the name of a new cultural poetics and politics.