Kay Pritchett, professor of Spanish at the University of Arkansas, has won the South Central Modern Language Association 2012 Book Prize!  We interviewed Professor Pritchett on her interest in Spanish poetry and her award-winning book, In Pursuit of Poem Shadows: Pureza 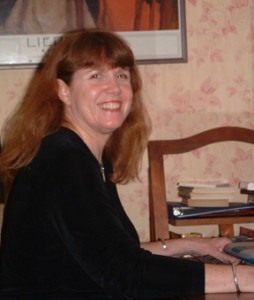 How did you first become interested in Pureza Canelo and in Spanish poetry more generally?

I was attracted to all things Spanish as a child, despite the fact that there was little in my Mississippi Delta upbringing to nudge me in that direction. In high school, I had an excellent Spanish teacher, Ms. Faye Chrismond, and decided then that Spanish would be my life’s work. In graduate school, where one usually chooses a genre as an area of concentration, poetry became my first love, given that, as a would-be critic, I appreciated the possibility of dealing with texts that, because of their brevity, readily lent themselves to in-depth analysis. My first book was on a group of Spanish poets, the novísimos, who are Canelo’s contemporaries. In expanding the parameters of that study, which had included only male poets, I began to peruse anthologies of contemporary poetry in search of feminine voices and became enthralled with Canelo’s early collections, Celda verde and Lugar común, both published in 1971. I had never before encountered verse that so radically defied standard Spanish, thereby inducing readers to discover new meanings and nuances. Those books of poetry, written at an early age, contained many of the themes that Canelo perceptively reworked in subsequent volumes.

You begin your book by writing that “the effect of Canelo’s poetry is to remind readers and, perhaps with more urgency, the poet herself that poetry understands little, perhaps nothing, of unqualified truth.” This is quite an old idea, going back at least to Ion, to what Plato viewed as the inherent problem of representation. In what ways does Canelo’s poetry explore the limitations of its form?

I had to come to grips with this issue in Nature’s Colloquy with the Word and again in In Pursuit of Poem Shadows, given that Canelo confronts this quandary in each book she writes. In writing the first study, I recognized that Canelo is in essence a symbolist and, at the same time, a creacionista, literary creationist. She recognizes yet is unwilling to surrender to the impossibility of representation and, because of this, continues to search for ways to bring her experience of the natural world into the poem. She believes that she has met with success when she manages to finesse, no matter how briefly, a convergence between nature and the word. Moreover, she views poetry–as did the literary creationists who came before her (Vicente Huidobro, Gerardo Diego)–as something animal, mineral, and vegetable. Her objective is not merely to imitate nature but to create nature in poetry.

Describe for us the evolution of Canelo’s poetry. What are the significant points of change?

Looking at Canelo’s books as a whole, one might view them as successive configurations of a writing space. The titles themselves suggest this: Celda verde (Green Cell), Lugar común (Common Place), El barco de agua (The Water Boat, 1974), and so on. The first major change came in her fourth book, Habitable (Inhabitable, 1979), in which she leaves behind an experiential approach and initiates a dialogue with what she has called the “cuerpo enjuto del poema” (lean body of the poem). In due course, the poematic speaker develops a “love relationship” of sorts with the poem, a development that has led some readers to think of certain volumes, especially Pasión inédita (Unpublished Passion, 1990), as love poetry. For me, however, it is difficult to think of Canelo’s poetry as anything other than a splendid, ongoing colloquy between poet and poem, one that generates striking imagery and remarkable insights. In this latter volume, she comes to regard poetry as “unpublished passion,” the implication being that poetry is not the finished poem but, rather, the creative process during which her passion for writing achieves jouissance. After this last volume, Canelo becomes discontented with this portrayal of the poet-poem relationship and comes up with the notion of “frugal poetry.” In the ironically titled book No escribir (Not to Write, 1999), she conceives of an unencumbered writing space, like the sky, that allows the poet to take flight, write spontaneously, instinctively. This is the last stage that I examined in In Pursuit of Poem Shadows. In a couple of recent conference papers and articles I have looked at subsequent books, three to date, and would say that, on the whole, they have remained true to this last approach–even if, from time to time, one detects a kind of nostalgia on the poet’s part for the hieros gamos (holy marriage between poet and poem) that she achieved in Pasión inédita.

In the book’s forward you mention that you sat down for an interview with Pureza Canelo in 2005. How did that interview inform your book? How did you balance the author’s comments with your readings of her works?

I attempted at that time to get a clear answer concerning an ambiguity that often arises in her compositions. I am referring to the matter I have just mentioned concerning the meaning of “love” within Tendido verso (Stretched Out Verse, 1986), Pasión inédita, and several other volumes. Canelo is a very private person, and ultimately I decided not to press the question of the relevance of a love interest to the poems. What I discovered, as I examined the poems over time, is that there is really no clear reference to a human lover, even in poems that personify the speaker’s “love interest.” In my view, her interlocutor is consistently the poem. However, if a reader chooses to read the poems as love poems, as some critics have, I have no interest in challenging that interpretation.

Pureza Canelo is, of course, still active. Are there any challenges specific to writing about an author still being published–particularly one such as Canelo, whose poetry you suggest has evolved so markedly?

I haven’t found this to be a problem, since I realized early on that Canelo’s poetry follows a path of periodic switchbacks. This is true of some of the greatest poets, Juan Ramón Jiménez, for example. As I receive each book, I look forward to discovering how far Canelo has gotten in her identity search and what her next destiny might be, given that she often provides some sort of hint toward the end: what she likes about her new “lodgings” and what about them she finds confining.

Are there any words you’d like to leave us with?

I might add that, although Canelo and I have spoken on only two occasions, there are few people with whom I feel a stronger bond. Reading her poetry and writing about her splendid evolvement as a writer has been at the center of my scholarship since 1989. Although she has humbly called herself a “minor poet,” I find her writing as interesting as that of Jiménez or Antonio Machado, who are, doubtless, two of Spain’s greatest twentieth-century poets. She is challenging, but an encounter with such poetic genius is well worth the effort.