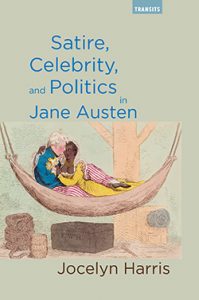 Read the latest reviews for Satire, Celebrity, and Politics in Jane Austen by Jocelyn Harris:

“Harris shows the inherent political nature of Austen’s satire by smartly linking her with the Hogarthian tradition of caricature. . . . Harris’s monograph ultimately leaves us with two questions, one explicit and one implicit: What if Austen’s lost correspondence was political rather than personal? And what would Austen think of celebrated figures today?”
-Melissa Rampelli, Holy Family University

“Harris’s thoroughness and detailed and intriguing analysis are exceptional. . . . Her sleuth work is incredible. . . . The twenty-first century student of Jane Austen will never read her in the same way.”
-Sylvia Kasey Marks, NYU Tandon School of Engineering, The Eighteenth-Century Intelligencer, March 2019 (33.1)

“Jocelyn Harris in this careful, enthusiastic and learned book shows how Jane Austen achieves vision through observation and creates a new and distinctive world from a recognisable world.”
-Tony Voss, Jane Austen Society of Australia

“Burney scholars will find Jocelyn Harris’s latest book Satire, Celebrity, and Politics in Jane Austen an enriching read…Considering the fact that Frances Burney and other members of the Burney family feature prominently in [Austen’s] allusions, [Harris’] book, by extension, sheds new light on the cultural influence of the Burneys on their contemporaries…the book gives shape to an Austen who was an avid and grateful consumer of the latest gossip, scandals and satirical prints about those from whom she was never far removed: famous writers, intellectuals and actresses, big naval figures, the royal family. With a keen eye for detail, Harris exposes the subtle connections between the unrestrained, public laughter surrounding such figures and the more restricted, oblique laughter in the novels, thereby deepening our understanding of Austen’s skill for satire in the process.”
-Elles Smallegoor; Burney Letter, The Burney Society, Spring 2018 (24.1)

“Harris’s impressive new book, Satire, Celebrity, and Politics in Jane Austen (2017), builds on the work of her pioneering 1989 study, deepening our sense of what Austen may have been up to in crafting her novels… For readers willing to engage with the possible, and to consider links that do not, at first glance, seem probable, Harris’s well-written, deeply researched, and timely book has a great deal to offer… Harris’s arguments are highly illuminating. For years to come, readers and critics will be weighing the massive number of new insights in this book, troubling through their implications for our future readings of Austen, politics, history, and popular culture.”
-Devoney Looser, Arizona State University; The Review of English Studies, New Series, 1–3

“Harris is well established as a guide to the wider thought-world of the author…In her latest book her expertise and questing curiosity are brought to bear on a set of themes that have not generally been associated with Austen.”
-Emma Clery, University of Southampton; Times Literary Supplement (February 2018)

“New Zealand academic Jocelyn Harris’s excellent Satire, Celebrity and Politics in Jane Austen published early this year shows what a keen political observer Austen was, and how her interest in the celebrities of the day, such as actress Dorothea Jordan and Sara Baartman (an African woman with very large buttocks who was exhibited in English freak shows as “the Hottentot Venus”), influenced and inspired characters in Austen’s fiction.”
-Susannah Fullerton; The Australian (July 2017)

“[T]his is a wonderfully rich and convincing presentation of much new material. Summing Up: Highly recommended. Lower-division undergraduates and above.
–CHOICE

“This book is an enjoyable one for anyone who has read Austen’s novels or watched productions of them on television…. Jocelyn Harris is an excellent writer. For an academic study, the usual jargon and allusions to various post-modern theories are happily absent in this book. It is packed with detail and citations. It’s is valuable for Cook enthusiasts because of its chapter on Molesworth Phillips, and the broader considerations surrounding the death of Captain Cook.”
–Cook’s Log

“Satire, Celebrity, and Politics is unfailingly fascinating in its dissection of Jane Austen, the satirist, and the text is enhanced by a well-chosen selection of contemporary portraits and gloriously scurrilous cartoons. The ‘stories behind the stories’ always make for an interesting read and Harris has produced a book that will be read with great pleasure by academics and devoted readers alike.”
–Jane Austen’s Regency World

“Jocelyn Harris’ book, which reflects on the ways in which Jane Austen’s work may have been influenced by what she knew about certain celebrities of her time, is a pleasant and accessible read…I would emphasize the thorough research into the socio-historical context that has gone into this book, and which makes it of interest to anyone who would like to know more of current events during Austen’s lifetime.”
-Rita J. Dashwood; The Jane Austen Society (Spring 2018)

In 2011, Barack Obama made a Presidential Proclamation that designated the month of June as National Caribbean American Heritage Month in the United States.  To commemorate this time when we celebrate the history and culture of Caribbean Americans, the Bucknell University Press is showcasing a few of our books that cover Caribbean topics.

Many of these selections are a part of our Bucknell Studies in Latin American Literature and Theory series, edited by Anibal González, Professor of Spanish at Yale University. The aim of the series is to provide a forum for the best criticism on Latin American literature in a wide range of critical approaches, with an emphasis on works that productively combine scholarship with theory. We have also included a title from our general collection that covers national identities across the Americas, a memoir of Puerto Rican writer Rosario Ferré, and an edition of the Bucknell Review (1941-2004) that is is devoted to analyses of Caribbean cultural identities.

Celebrate the beginning of summer and National Caribbean American Heritage Month with the spirit of Caribbean culture captured in these books. Follow the links in the list below for more information on each title.

Out of Bounds: Islands and the Demarcation of Identity in the Hispanic Caribbean (2008)
By Dara Goldman
Bucknell Studies in Latin American Literature and Theory