Every year since 1987, the month of March has been designated as National Women’s History Month.  The campaign that pushed this declaration of Congress was led by the National Women’s History Project, an organization founded in Santa Rosa, California by a group of women driven to broadcast women’s historical achievements.  As their motto has become “Writing Women Back into History,” I thought I would search our database to see what kinds of writings have been inspired by women in our own collection.  In fact, it was hard to narrow down.  The subjects revolving around women were many and varied, all so different and intriguing in their own ways.  In the end, it came down to these… 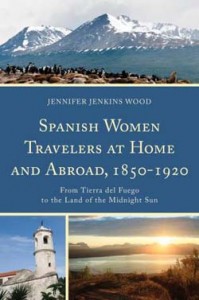 Between 1850 and 1920 women’s travel and travel writing underwent an explosion. It was an exciting period in the history of travel, a golden age. While transportation had improved, mass tourism had not yet robbed journeys of their aura of adventure. Although British women were at the forefront of this movement, a number of intrepid Spanish women also participated in this new era of travel and travel writing. They transcended general societal limitations imposed on Spanish women at a time when the refrain “la mujer en casa, y con la pata quebrada” described most of their female compatriots, who suffered from legal constraints, lack of education, a husband’s dictates, or little or no money of their own.  Spanish Women Travelers at Home and Abroad, 1850 – 1920: From Tierra del Fuego to the Land of the Midnight Sun analyzes the travels and the travel writings of eleven extraordinary women: Emilia Pardo Bazán, Carmen de Burgos (pseud. Colombine), Rosario de Acuña, Carolina Coronado, Emilia Serrano (Baronesa de Wilson), Eva Canel, Cecilia Böhl de Faber (pseud. Fernán Caballero), Princesses Paz and Eulalia de Borbón, Sofía Casanova, and Mother María de Jesús Güell. These Spanish women travelers climbed mountain peaks in their native country, traveled by horseback in the Amazon, observed the Indians of Tierra del Fuego, suffered from el soroche [altitude sickness] in the Andes, admired the midnight sun in Norway, traveled to mission fields in sub-Saharan Africa, and reported on wars in Europe and North Africa, to mention only a few of their accomplishments. The goal of this study is to acquaint English-speaking readers with the narratives of these remarkable women whose works are not available in translation. Besides analyzing their travel narratives and the role of travel in their lives, Spanish Women Travelers includes many long excerpts translated into English for the first time.

This book revolves around women who lived for adventure, who put themselves out into the world to experience all that it has to offer, and then wrote about it in ways of their own.  It is a fascinating study of women and how this writing genre spanned across cultures to encompass the interest of many, highlighting those stories that may have been overlooked because of language barriers.   A writing of women adventurers back into history! 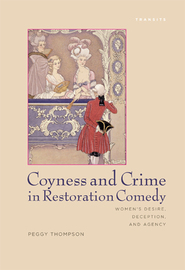 Coyness and Crime in Restoration Comedy examines the extraordinary focus on coy women in late seventeenth-century English comedies. Plays by George Etherege, William Wycherley, John Dryden, Aphra Behn, Thomas Shadwell, William Congreve, Catharine Trotter, Thomas Southerne, John Vanbrugh, and Mary Pix—as well as much modern scholarship about them—taint almost all feminine modesty with intimations of duplicity and illicit desire that must be contained. Forceful responses by men, therefore, are implicitly exonerated, encouraged, and eroticized. In short, characters become “women” by performing coyness, only to be mocked and punished for it. Peggy Thompson explores the disturbing dynamic of feminine coyness and masculine control as it intersects with reaffirmations of church and king, anxiety over new wealth, and emerging in liberty, novelty, and marriage in late seventeenth-century England. Despite the diversity of these contexts, the plays consistently reveal women caught in an ironic and nearly intractable convergence of objectification and culpability that allows them little innocent sexual agency. This is both the source and the legacy of coyness in Restoration comedy.

Coyness and Crime revolves around a time when women were written into history through theatre, but in a negative way, dominated by masculine control.  Thompson studies this genre to uncover the reasons behind this injustice and to write women back into history without the bias of the time in which Restoration comedy was being produced. 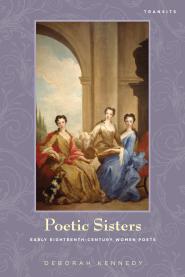 In Poetic Sisters, Deborah Kennedy explores the personal and literary connections among five early eighteenth-century women poets: Anne Finch, Countess of Winchilsea; Elizabeth Singer Rowe; Frances Seymour, Countess of Hertford; Sarah Dixon; and Mary Jones. Richly illustrated and elegantly written, this book brings the eighteenth century to life, presenting a diverse range of material from serious religious poems to amusing verses on domestic life. The work of Anne Finch, author of “A Nocturnal Reverie,” provides the cornerstone for this well informed study. But it was Elizabeth Rowe who achieved international fame for her popular religious writings. Both women influenced the Countess of Hertford, who wrote about the beauty of nature centuries before modern Earth Day celebrations. Sarah Dixon, a middle-class writer from Kent, had a strong moral outlook and stood up for those whose voices needed to be heard, including her own. Finally, Mary Jones, who lived in Oxford, was praised for both her genius and her sense of humor. Poetic Sisters presents a fascinating female literary network, revealing the bonds of a shared vocation that unites these writers. It also traces their literary afterlife from the eighteenth century to the present day, with references to contemporary culture, demonstrating how their work resonates with new generations of readers.

This work provides the stories of five women writers and how their works have had an effect on the course of literary history.  It is a study that writes women back into a specific genre of poetic history. 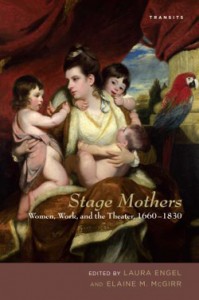 Stage Mothers explores the connections between motherhood and the theater both on and off stage throughout the long eighteenth century. Although the realities of eighteenth-century motherhood and representations of maternity have recently been investigated in relation to the novel, social history, and political economy, the idea of motherhood and its connection to the theatre as a professional, material, literary, and cultural site has received little critical attention. The essays in this volume, spanning the period from the Restoration to Regency, address these forgotten maternal narratives, focusing on: the representation of motherhood as the defining female role; the interplay between an actress’s celebrity persona and her chosen roles; the performative balance between the cults of maternity and that of the “passionate” actress; and tensions between sex and maternity and/or maternity and public authority. In examining the overlaps and disconnections between representations and realities of maternity in the long eighteenth century, and by looking at written, received, visual, and performed records of motherhood, Stage Mothers makes an important contribution to debates central to eighteenth-century cultural history.

Each of these works contributes to a recognition of women’s endeavors and representations over the course of history.  They all resonate with the mission of the National Women’s History Project, to write women back into history, and also span a variety of complex topics from travel to poetry to theater.  Every year, the National Women’s History Project selects a unifying theme to be shared with all who want to promote women’s history, and the variety of books in this selection certainly adheres to the theme for 2015: “Weaving the Stories of Women’s Lives.”